Even though there are already many, many blog posts, tutorials and even youtube videos about "reverse engineering iOS apps", every time Apple releases a new iOS version the "game" changes; researchers have to find a new way to jailbreak the new released version of iOS and we have to update our tools to work with the new jailbroken environment. This is especially true for the latest iOS 11 jailbreak, both LiberiOS and Electra jailbreaks, which are based on Ian Beer's async_wake exploit, have very different techniques than the previous jailbreaks and most (all?) of the existing tools are broken on these jailbreaks.

I'm going to focus on LiberiOS for this post since that's the only jailbreak I've tested. But also because I'm a huge fan of Jonathan Levin's work and his contributions to the community. The LiberiOS jailbreak is what's called a KPP-less jailbreak (KPP stands for Kernel Patch Protection). It basically means there are no modifications to the kernel areas that KPP guards, and most of the jailbreak tools (like Clutch, dumpdecrypted) and all of the tweaks that depend on Cydia Substrate haven't been updated to work with this approach.

This post ended up being a bit too long, so I decided to split it in two parts:

To begin RE'ing iOS apps you need a jailbroken device. In this post I'm assuming you are on iOS 11 so let's start with jailbreaking your device. I like the iClarified tutorials and they have a great one for jailbreaking your iPhone/iPod/iPad (iDevice) on iOS 11-11.1.2:

Even though LiberiOS' version of Dropbear SSH has wifi connectivity enabled, I find USB faster and more reliable. To SSH into your device via USB using your lighting cable you'll need to setup iTunnel (or a similar tool).

As I said before, many of the existing tools don't work as in previous jailbreaks, but thanks to Bishop Fox we can now use Clutch in LiberiOS by doing the following:

Update: if you get the bash: scp: command not found error, you'll need to execute /jb/makeMeAtHome.sh before being able to use scp. (Thanks @jackmccr for the heads up):

tl;dr of why we need to decrypt apps first

The app binary of an app downloaded from the App Store is encrypted using Apple's FairPlay DRM to protect the dev's intellectual property and avoid tampering. 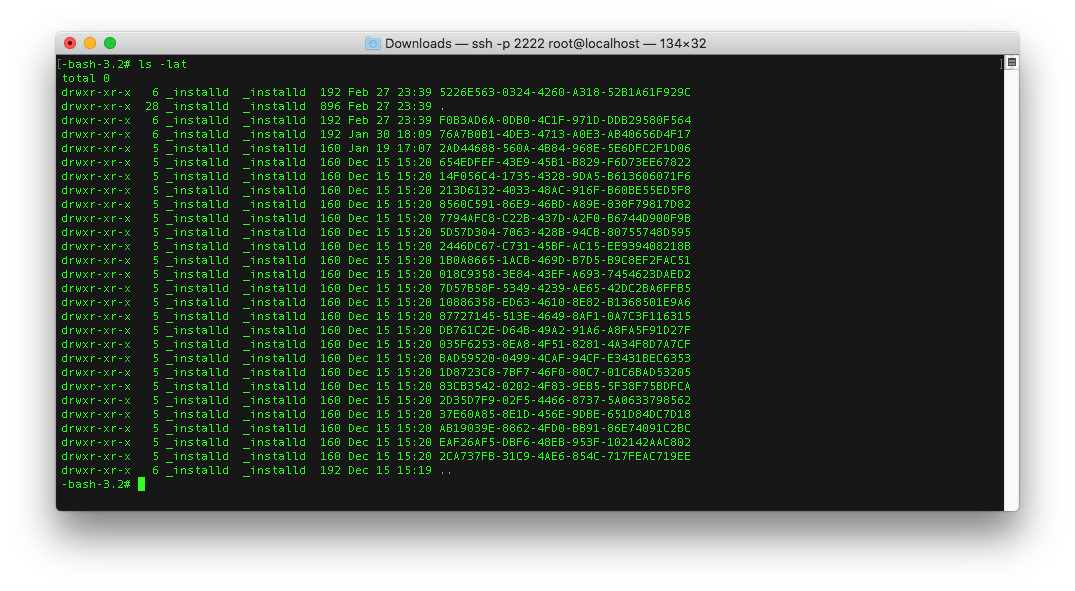 If you change directories to the Starbucks.app, here you'll see all the files included with the Starbucks app bundle. As you can see not a single file is encrypted. When Apple says they encrypt the app, they mean the actual binary not the assets and extra files. (Tip: sometimes you might get lucky and find some server configuration files or secret keys because some devs might not realize we can extract these files). Don't worry about transferring these files to your machine, you'll have access to them once we decrypt the app.

If you didn't move/copy the .dylib libraries to /usr/local/lib you will need to change directories to /jb/bfinject and execute the command from there.

Update: if you get the bash: scp: command not found error, you'll need to execute /jb/makeMeAtHome.sh before being able to use scp. (Thanks @jackmccr for the heads up):

I know this is a lot of information and instructions, that's why I divided this post in two parts. Try repeat these steps with a few different apps to get familiar with the flow and the tools and next we'll get a sense of how to disassemble and dump the decrypted app's classes.

Note: The reason why I chose the Starbucks app is because they have a bug bounty program on HackerOne and their iOS app is in scope of that program, so if by following this tutorial you manage to find a vulnerability you get to report it to them.

This is a somewhat complicated topic to cover, but I'll try to go into detail on why, generally, this is not a good idea and you should avoid embedding secrets in your mobile applications as much as possible. tl;dr Anyone motivated enough will get these secrets and impersonate your

Disclaimer: First of all, I'm not writing on behalf of any entities involved in the development of the COVID Alert application. This is my take as a software engineer with some experience in mobile development. This post is aimed to people with some questions about this application but might not

It's always a good idea to properly configure your computer and smartphone, know how to securely communicate with others and how to read, write and share content while protecting your personal information. These practices are more relevant than ever. OPSEC stands for operations security, taken from wikipedia: "Operations security